Greetings from Marvin's Daughter. Today I have a delicious recipe for Au Jus from Fabio! that I made. Also a roast recipe from Pinterest to go with the Au Jus to make a delicious French Dip sandwich. Yum Yum pretty much sums it up! I just happened to run across Fabio's recipe while browsing the Internet and thought "yes, I will be trying that!" I did mix up a few thing slightly but otherwise I pretty much stuck to the recipe.
I asked the butcher at the grocery store for beef bones and they had some already packaged. Pretty much everything else was in the produce department. 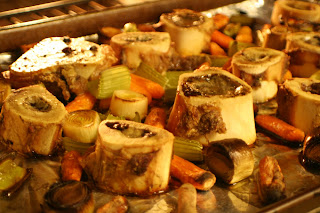 And yes this smelled wonderful as it sizzled in the oven. 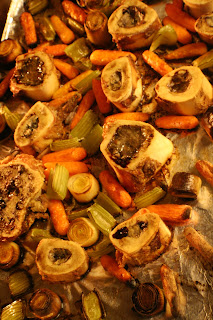 Below it is not the most appetizing photo but you do simmer everything for 4hrs, so this phase deserved a picture too! I probably should have turned my veggies during the roasting phase, luckily they are just for flavor. 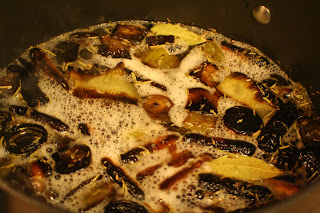 This is where I changed up Fabio's recipe a bit. In Fabio's recipe he says to use leftover prime rib and if I had had some prime rib I would have used it! I did have a hunk of tri-tip that I used, but I wanted more meat so I picked up this roast at the grocery store. 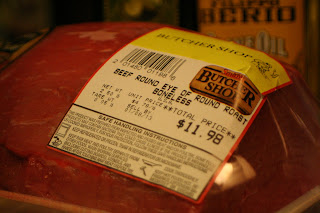 I used a roast recipe I had seen on Pinterest and had already tried before. Although I think this recipe does cook the roast to just the right degree of rare to med rare, the flavor is still up to the quality of the meat and what seasonings you use. So in other words it is not the most flavorful recipe but it worked great for my sandwiches with the tasty Au Jus. As you can see in the picture below I went simple on my seasonings. 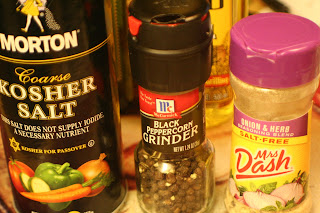 And a pretty little roast she was! 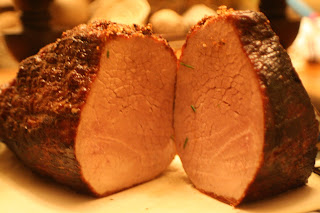 I used some yummy melt in your mouth Dutch crunch rolls from the grocery store bakery. I toasted them just like Fabio says, well toasted them on my George Foreman Grill, and I really think that makes all the difference for the melt in your mouth effect. I don't eat much bread usually, mostly because I already physically resemble a loaf of bread, but I made an exception for these sandwiches! 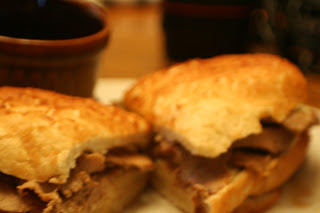 Make sure to read both recipes all the way through before starting. Both recipes take some time. I made everything the day before and then relaxed and enjoyed the sandwiches the next day. Cutting the frozen slightly thawed roast beef was very time consuming. It worked, but be sure to do it before guests come over.....even if their family. 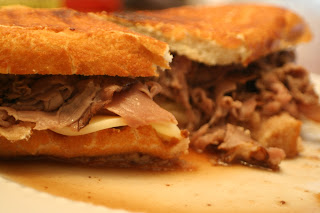 Everyone enjoyed the sandwiches, thumbs up all around!! I will definitely use the Au Jus recipe again. I did skim most the fat off of the Au Jus the next day before I warmed it up and I liked it even better! I also liked the taste of the Guy Fieri tri-tip from Costco better than the roast I made and it was
easier to slice, so I will be using the Guy fieri tri-tip next time too. 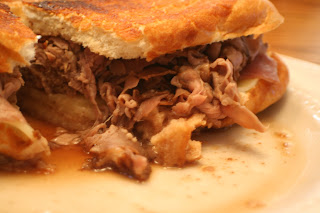 Below are the links to both recipes.

High Temperature Eye of Round Roast

Thank you for joining me on this quick food journey! I am not a professional cook, just a happy foodie!

Email ThisBlogThis!Share to TwitterShare to FacebookShare to Pinterest
Labels: Recipes